The Trembling Wilburys ended 2013 with two great Christmas gigs, the first at the legendary Dingwalls in London’s Camden Lock, and the second at our pal Denis Cook’s new venue, the Flamingo on the Pond in Watford. The Dingwalls gig was also drummer Dave Stark’s SongLink 20th Anniversary party, and saw a great turnout of music industry friends and supporters, along with many new faces seeing the band in action for the first time.

We received rave reactions to both the Wilburys set and our special Roy Orbison tribute set, just three days before the 25th anniversary of the Big O’s untimely passing on the 6th of December, 1988. We also repeated both sets at the Flamingo in Watford, where we were delighted to welcome a good crowd who’d made the trek despite awful parking and roadworks all around the venue! 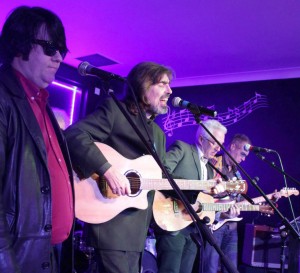 The Trembling Wilburys at the Flamingo, Watford

As we enter the New Year, things are looking Tremblin’ good for future gigs, with no less than 3 festivals confirmed for 2014 so far: the Marvellous Festival of tribute bands near Reading (July 20th); the Broadstairs Folk Festival in Kent (August 13th); and most excitingly our first trip abroad to Beatles Day in Mons, Belgium (October 11th). We’ll be getting together in January to work out some new numbers, so stay tuned to the site and our Facebook page for more gigs, photos and other news over the coming months. Wilbury seeing you soon folks!