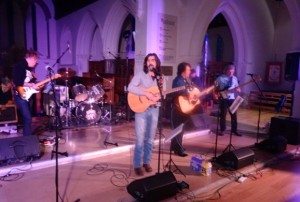 In other news, we’ve been busy since January with great gigs at The Roadhouse in Birmingham; our return to the wonderful Half Moon in Putney; and our debut at Farncombe Music Club which is located in the magnificent St. John’s Church in Farncombe by Godalming. Many thanks to promoter Julian Lewry and his team for making us feel so welcome and for such professional organisation, we had a really great time (as did the audience) and look forward to being back there next year.

We’ve added a couple more Wilburys songs to the set which went down well on their first outing at Farncombe, namely “Inside Out” and the epic that is “Tweeter And The Monkey Man” by popular demand – we still can’t believe that our Bob Dylan (Andy McNish) has managed to memorise all the lyrics perfectly!  Our show is now divided into two distinct halves, with the first set devoted to solo hits by the individual members, while the second set is the full Wilburys’ experience which doesn’t stop rocking from start to finish… and then some!
Looking ahead, we’re constantly adding new dates so keep an eye on our gig list  – next up is The Horns in Watford on Easter Sunday April 5th and the Tropic at Ruislip on Friday April 24th, followed by appearances in Sunbury-on-Thames (June 19), Basildon (July 18) and the Livestock Festival in Enfield on August 29th, which looks like a great event now in its third year.  If you know of any venues or events we should be playing at then please get in touch, we’re always open to offers!
BOOK US HERE:
Contact David Stark 07956 270592
e-mail: david@songlink.com
FRIEND US AT FACEBOOK:
www.facebook.com/tremblingwilburys
TREMBLE AT TWITTER:
https://twitter.com/TremblingWilbur
YODEL AT YOUTUBE:
www.youtube.com/user/TremblingWilburysUK