Summer’s here, the cricket season is in full swing and the Wilburys had a blast at Sunbury C.C. recently, where we bowled a few maidens over and scored a big hit with our 2-hour rocking show. As you can see we also had a lorra fun on the pitch & sight stand, we’re only a seven-man team but we sure know how to handle our bat & balls with care – howzat?! 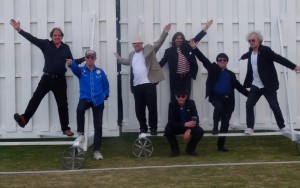 Next up is our debut appearance at Towngate Theatre in Basildon, Essex on July 18th, followed by a return trip to The Roadhouse in King’s Norton, Birmingham on July 24th.  Then it’s the Livestock Festival at Forty Hall Farm in Enfield on August 29th, and the Boom Boom Club in Sutton the following day, Sunday August 30th (Bank Holiday weekend).  And on September 20th we’re back at the wonderful Half Moon Putney for the third time. Have a great summer and we’ll catch you at the end of the line! 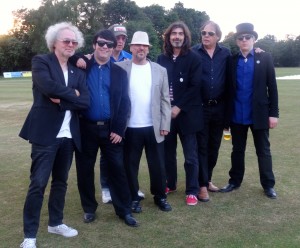 1 thought on “It’s Not Cricket, It’s The Wilburys!”