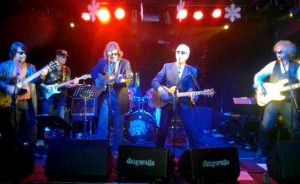 The Trembling Wilburys ended 2013 with two great Christmas gigs, the first at the legendary Dingwalls in London’s Camden Lock, and the second at our pal Denis Cook’s new venue, the Flamingo on the Pond in Watford. The Dingwalls gig was also drummer Dave Stark’s SongLink 20th Anniversary party, and saw a great turnout of music industry friends and supporters, along with many new faces seeing the band in action for the first time. END_OF_DOCUMENT_TOKEN_TO_BE_REPLACED 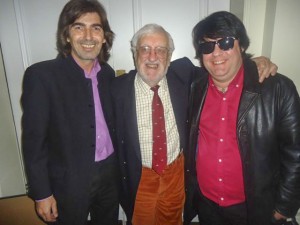 Showbiz legends were in abundance at the Regents Park Marriott Hotel in Swiss Cottage on Saturday 16th November, when the Heritage Foundation paid special tribute to actor and comedian Bernard Cribbins OBE on achieving 70 years in the business. Best known for narrating The Wombles TV series; his appearances in three Carry On films; two hit records (‘Right Said Fred’ and ‘Hole In The Ground’) plus appearances in Doctor Who, Jackanory, Fawlty Towers, Wrong Arm Of The Law and many other TV programmes and feature films, Cribbins (84) was delighted to receive recognition from his peers at the Heritage Foundation’s annual Christmas Lunch. The glitzy event (complete with crackers, turkey & mince pies) concluded with a full set by the Trembling Wilburys, whose singers Glen Knowler (as George Harrison) and Dave Collison (as Roy Orbison) are seen flanking Cribbins. This turned out to be one of our best performances yet, and a great warm-up for our special Xmas party night at Dingwalls in Camden on December 3rd. END_OF_DOCUMENT_TOKEN_TO_BE_REPLACED

Rod Davis with the Wilburys

The Trembling Wilburys returned to London Beatles Day on Sunday October 20th for the third time to play a short acoustic set, marking exactly 25 years of the original Traveling Wilburys, which was well received by a highly appreciative crowd. The event was also much busier than usual due to the presence of author Mark Lewisohn talking about his mammoth new Beatles biography “All These Years – Vol. 1: Tune In”, and signing copies all afternoon in an adjacent room – thereby sadly missing our fine set (!) which consisted of ‘She’s My Baby’, ‘Dirty World’, ‘If I Need Someone’, ‘Here Comes The Sun’, ‘You Got It’, ‘End of The Line’ and ‘Handle With Care’. END_OF_DOCUMENT_TOKEN_TO_BE_REPLACED